PARLER IS ABOUT TO BLOW...#theStorm

Parler is about to blow, here's a summary.

The world is under the control of several trans-generational crime syndicates and elite death cults who merged in recent years under the common goal to impose a one-world despotic government and population reduction to the tune of 90%.

After completely compromising every form of global power using pedophilic blackmail as their favored method, elements in the US military loyal to the Republic devised a sophisticated plan of incomprehensible precision to root them out and expose their crimes to the world such that humanity would never allow it to happen again.

Trump's first term was for installing the legal framework for a sting operation to ensnare them in a web of treason, espionage, and election theft, while demonstrating to the people how close we had come to a communo-fascist hellscape of tyranny echoing the 3rd Reich. You've just turned to the final chapter of a spectacular story that will resonate throughout the ages. God bless USA. ft_ 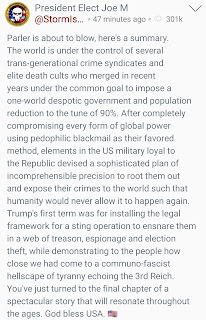